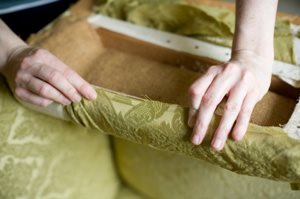 In march of this year, Texas House Representative Eddie Lucio III proposed new furniture flammability legislation—reigniting a debate that has raged on and off since California introduced Requirements 117 and 133 during the 70s. This new bill is set to become law in September 2012 if it continues un-apposed, though this appears unlikely as the Polyurethane Foam Association have already written to ask Representative Lucio to reconsider.

In 2002, the most recent year for which the Consumer Product Safety Commission reported statistics, there were 369,000 residential fires in the U.S. Cooking equipment was to blame in one third of the fires, followed by heating and cooling equipment, wiring and lighting and finally, tobacco. In 20% of the fires that resulted in a single death or more, upholstered furniture was listed as the first item to ignite in the fire.

However, as the American Home Furnishings Alliance reports, solutions currently in place or being considered to address the fire issue involve flame-retardant chemicals. The chemicals themselves are now under increasing scrutiny as potential health hazards. In fact, such chemicals have been banned in Europe and are being phased out in California, too. Furthermore, the Upholstered Furniture Action Council (UFAC) has in place a voluntary standard that manufacturers can follow to address the tobacco ignition source in upholstered furniture fires.

Nonetheless, it pays for your company to play close attention to this ongoing debate, and to align itself with a supplier that can quickly adapt to any future changes in legislation. When required, Newport Furniture Parts can meet the California Fire Requirements 117 and/or 133. And it should also be noted that several other states have adopted the California Fire Requirement 133 for upholstered furniture in public places.

Our qualified personnel, expertise and cutting-edge technology can provide your company with top-quality upholstery, using material provided to us or our own in-house material and fabric. Newport Furniture Parts is proud of its reputation as one of the leading players in the wood furniture component industry.