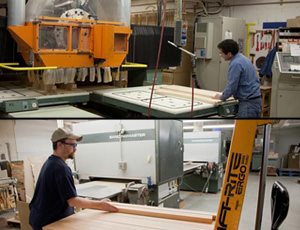 The “Great Recession” or the “Recession”, however you refer to it, appears to be a thing of the past according to economists. This recession, whose effects began to be strongly felt late in 2007 and through ‘til the summer of 2009, impacted the entire world economy.

Even though the economy is slowly improving, the effects of this recession are still felt in several sectors; high unemployment rates and economic adversity still linger in many countries.
When the market crashed on 2007 a lot of people lost their employment, their home and their savings. For many, this period marked the beginning of a new way of living: limit spending and save money. For countless companies, from wood furniture companies.

to rocking chair manufacturers, this time most likely represented a slowdown in business.

Recession
A time of overall economic decline generally characterized by a lower gross domestic product for a minimum of two successive quarters; this period is generally accompanied by higher unemployment rates, a significant drop in the stock market and declines in the real estate market.

Consumer confidence
Although economists have been saying for a certain time now that the Great Recession is over, it seems that consumers are finally getting back on board and starting to spend again.

"After four long years of declining orders and sales, our participants finally had a year where both sales and orders were up for the year," Smith said.

Optimism for 2011
Improving consumer confidence and a slowly recovering economy leave some to believe that 2011 may be better than 2010. Although no miracles are expected for the first quarter, the belief is that if the economy can keep on rolling, then there should be progress for wood component manufacturers and furniture chair parts producers in 2011.

Economic progress
It is the sale of products and services which stimulate the economy; therefore an increase of sales is a significant indicator of economic progress. Industries which are at the beginning of the chain of consumer products, such as the wood component manufacturers are good indicators of retail sales performances and changes in the economy.